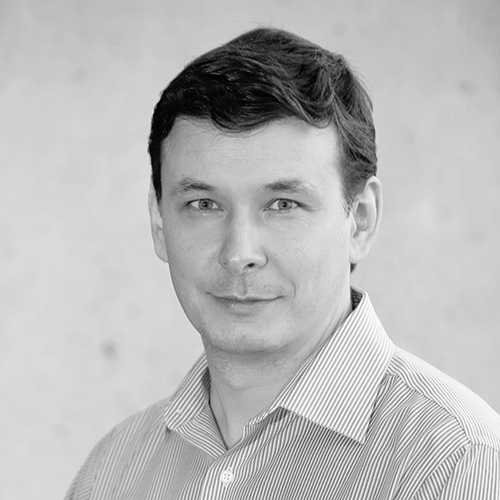 Alex earned his Ph.D. in physics of semiconductors from Chernivtsi National University, Ukraine for his work on electronic properties of nitride semiconductor alloys. In 2004 he joined the Quantum Semiconductors and Bionanophotonics lab at University of Sherbrooke as a postdoc, working on theoretical modeling of laser-assisted quantum well intermixing and self-assembly processes of organic monolayers on metal and semiconductor surfaces for applications in bio-sensing. In 2008 he moved to Quantum Theory Group at National Research Council of Canada in Ottawa, where he worked on many-body problems in epitaxial and colloidal semiconductor and graphene quantum dots; in particular, simulations of multi-exciton generation, Auger processes and optical properties of nanocrystals used in hybrid polymer-semiconductor solar cells.

Alex joined Ted Sargent’s Nanomaterials for Energy Group in 2011 and worked on characterization and modeling of the semiconductor nanocrystal surfaces and developing the synthesis methods for nanomaterials with improved optical and transport properties for photovoltaics. In 2018, Alex joined the Department of Physical and Environmental Sciences at the University of Toronto, Scarborough as an Assistant Professor in Clean Energy. His topics of interest are materials for energy storage and novel materials discovery using high-throughput experiments and machine learning.